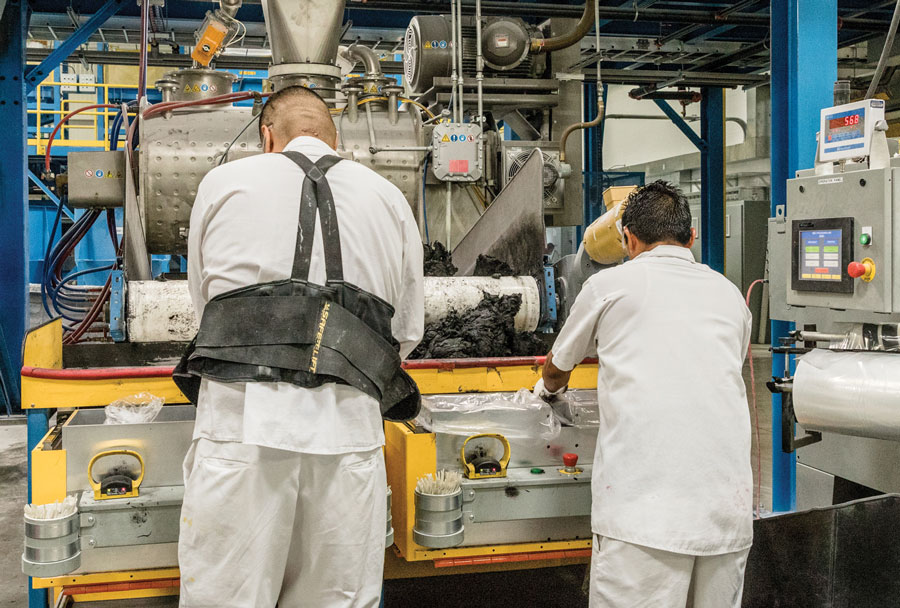 Aug. 16 was a big day for Mar-Bal Inc., as the thermoset plastics firm formally opened its new production site in Painesville.

Painesville will be the home of Mar-Bal’s compounding unit, which will operate as Altraset Composite Technologies. The firm makes compounds on five mixing lines in Painesville while also making finished parts on 23 injection presses.

“Starting Altraset was like the birth of a baby,” President and CEO Scott Balogh said at the event, “and like with a child, you think of the potential of the facility.”

Mar-Bal officials began looking at compounding plants around the world four years ago to gather the best technology and practices for the new plant, he added. They then located the 110,700-square-foot Painesville building, which was previously occupied by injection molder Core Systems before that business closed in 2013. Mar-Bal has hired many former Core employees.

“It’s a testament to the grit and determination of our staff that we designed, built and moved in to the new plant in one year,” Balogh said. “And we didn’t miss a single shipment.”

Mar-Bal started making compounds in Painesville in January and reached full production in April. The firm also recently bought an adjacent 5-acre parcel from the city of Painesville, which is located east of Cleveland. Acquiring that land will allow Mar-Bal to build an expansion of between 20,000 and 35,000 square feet within the next three years.

Mar-Bal now employs 130 in Painesville and could add another 70-80 to that total through the expansion. The firm already has moved compounding work from Chagrin Falls to Painesville, which is about 30 miles away. The firm’s headquarters and R&D lab will remain in Chagrin Falls.

Mar-Bal is investing about $15 million overall on the move to Painesville. It’s part of an overall strategy change in which Mar-Bal will sell more of its composites to outside firms, in addition to internal use.

The Painesville site has almost twice as much manufacturing space as Mar-Bal had in Chagrin Falls. The move will also double the firm’s annual production capacity company wide for bulk molding compounds. Mar-Bal is receiving financial support for the Pasinesville project from the JobsOhio nonprofit group and from the city.

Joyce said companies such as Mar-Bal “are the backbone of American communities.” Joyce has known Scott Balogh and Scott’s brother Steven, Mar-Bal’s executive vice president, for many years, and he filmed one of his first campaign commercials at the firm’s plant in Chagrin Falls.

Jim Balogh, Scott and Steven’s father, founded Mar-Bal in 1970 in Cleveland after emigrating from Hungary. As a teenager in Hungary, Jim Balogh was jailed after taking part in that country’s revolution in 1956. He later escaped and enlisted in the U.S. Army while still in Hungary.

At the grand opening, Steven Balogh recalled how at Mar-Bal’s first location in Cleveland’s Flats industrial area, his father used an old Volkswagen Beetle to drag a compression press into a work area.

Jim Balogh’s work ethic also rubbed off on his sons.

Today, Mar-Bal custom molds thermosets and molds proprietary electrical standoff insulators under the Glastic and Mar-Bal tradenames. The products are based on thermoset polyester and contain flame retardants and track-resistant glass fibers.

In addition to Ohio, Mar-Bal has manufacturing operations in Cuba, Mo.; Dublin, Va.; and Taizhou, China. The firm also has an Asia sales office in Shanghai. Mar-Bal employs 500 worldwide and posted sales of around $65 million in 2017.

No comments to show.